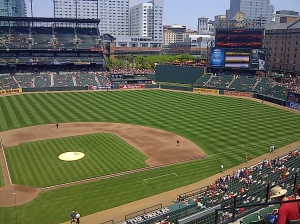 It’s the best damn stadium in all of baseball. Any Phillies fan will tell you that.

But once in a while, you have to spread your wings, travel around a bit and see why other fans will argue that their park is the coziest, comfiest and most beautiful place to watch a game of baseball.

Cities like New York, Boston, Pittsburgh, Washington D.C. and Baltimore offer Phillies fans the opportunity to travel via road trip to catch a baseball game. I can safely say I’ve watched baseball in each of those cities but Boston and D.C. (I did catch the Marlins in Miami a few years back).

But what makes the trip better is seeing your home town team playing as the visitors in an opposing park. That is what a handful of us from TTB did this past weekend, as well as 70 percent of the attendance in Baltimore all weekend.

Dan MacNeal, his girlfriend Alicia, my brother and I drove down to Baltimore yesterday morning to meet up with fellow TTB writers Chris Bengel and Allison Stackhouse to catch Sunday’s 5-4 loss in 10 innings thanks to Matt Wieters’ heroics.

The road trip itself was great. Any time Dan, Alicia and I are together for an extended period of time, hilarity ensues. My poor brother thought we were nuts.

So we got to Baltimore, parked 18 miles from the stadium and walked to the park in 152-degree weather… Okay, it was more like half a mile and it was 90 out. But after a week of rain and cold on the shore of Atlantic City, it felt like an unnecessarily high exaggerated distance and temperature.

It probably felt that long for Alicia anyway, because we spent about 30 minutes trying to search for a bathroom and she was pretty grumpy.

So after the six of us met up on Eutaw Street, we went inside, browsed the merch shop and took a group photo in the right field fence. We also took a couple pictures in their miniature version of Yankee Stadium’s Memorial Park with me having my picture taken with the giant 8 representing Cal Ripken Jr’s retired number.

We then scoured the park, grabbed food and made our way to our seats, all located in three different sections of the 300 level to take in the game.

After the game we trekked back, but were held up because Alicia fell in love with an orange van that had a giant Oriole bird on it (she loves the old cartoon bird logo they brought back).

Now I’ve been to Oriole Park at Camden Yards over a dozen times. It’s like a second home ball park to me since I’ve always had a soft spot for the O’s since I was a kid and our family went to Baltimore a lot in the summer.

You have an extremely friendly atmosphere in Baltimore. It’s a modern ballpark, but has “that retro feel” Dan said as we were leaving. (It was his first trip to Camden Yards and he loved it.)

Then you have the warehouse in right field. It is such an incredible site to the giant warehouse-turned-office building in right field, where the ground in front of it is laden with bronze baseball plaques telling of the monster home runs hit in that direction.

Before the game I was searching for food and a beer stand of the local brewery. I found two gems that Philly fans will love.

First I had to hit up the nacho stand. They had a brilliant concept for $9 that had nachos with anything you want on top (cheese, salsa, jalapenos, sour cream, meat) inside of an orioles helmet!

If you ever ordered ice cream in a mini helmet at the Bank then you know exactly what I’m talking about.

As for beer, their local craft brewery is Flying Dog out of Frederick, MD. (Not that National Bohemian aka Natty Boh crap that everyone talks about.)

I determined as I was looking at the five-beer selection that it was too hot for an IPA. So I had the pale ale and it was pretty good. Click on the above link and check out the brewery. Their beer is sold throughout Delaware, New Jersey and Pennsylvania.

And finally, there’s Boog’s BBQ, which was there since the park opened up in 1992. I didn’t bother stopping for BBQ because there was too little time to do so much. Anyone who goes to a Phillies game knows this dilema and knows that’s one way they get people to want to return to the park over and over.