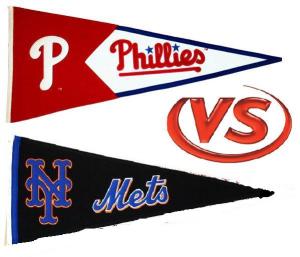 Player to Watch – Jose Reyes: It’s one last time this year fans will get to boo the most hated Met in the last 10 years. Reyes is a gamer though despite having a slightly of year by his standards. Reyes is batting .284 with 11 homers and 51 RBIs, all pretty well off his capabilities. It may be time to think that Reyes’ best years are behind him as he’s had health issues and is a liability to the Mets, who need a desperate make over to be a contender.

Series overview: It’s the final home series for the Phillies before the playoffs. And fittingly enough, it could end having a celebration as early as Saturday. With the Phils magic number now at four games, two more wins and two more Braves losses will give the Phils their fourth straight NL East title.

The Phillies are riding a 10-game winning streak and have nine games to play. If they can go 6-3 in their final series against the Mets, in Washington, and in Atlanta, they will have the third winningest season in franchise history. If they win out, ending the season on a 19-game winning streak, they will tie the 1976 and 1977 teams with the most wins in club history.

Since July 28, the Phils are 44-15, a winning percentage of .746. In the month of September, they are 18-3, by far the best September record in baseball. They are the hottest team in baseball and arguably the best.

The Phils are skipping Kyle Kendrick’s start in order to line up their rotation against the Braves in the finals series. As scheduled, Joe Blanton will pitch Friday. Heavy B has been up and down in September, posting 4.37 in four starts. He hasn’t lost a start since July 21, a span of 11 starts. Facing him is R.A. Dickey, another goofy knuckle-baller who actually has a decent fastball. Dickey has screwed up the Phillies twice before but the Phillies bested him in one game, drilling him for six runs in three innings.

Cole Hamels will pitch Saturday in place of Kendrick. Hamels has been absolutely untouchable. In his last five starts, Hamels has allowed only two runs in 36 2/3 innings pitched, an ERA of 0.49. He’s facing Dillon Gee, another pitcher the Phillies have never seen before. This could spell trouble for the offense as they have a hard time adjusting to first-time meetings.

Roy Halladay will likely take the hill on Sunday on Fan Appreciation Day. Facing Pat Misch, he will go for win no. 21 as he tries to win himself his first NL Cy Young award.