As Harry closed out the call for the Phillies game in Colorado on Easter, nobody expected that it would be his final call.  As the team headed to Washington for a series with the Nationals (and visit to the White House), Harry took his normal place in the broadcast booth prior to the game.  Harry then collapsed in the booth around 12:30 and taken to a local hospital where we was pronounced dead.

The game went on as scheduled, after some discussion, with the Nationals organization announcing Kalas’ death during the pregame festitivies, asking the stadium in a moment of silence.  Phillies president David Montgomery said Kalas would want the game to go on. The team taped up a picture of Harry in the visiting dugout, which later visitors left up as a sign of respect.  After Shane Victorino’s home run, he pointed to the broadcast booth after he touched home plate.

Longtime Dodger broadcaster Vin Scully had this to say about his colleague:

He was not only a multitalented fellow with a wonderful voice. He was a lovely guy. I mean, everybody liked Harry. The city of Philadelphia will just be in mourning because they loved him so much. I’m happy for him that his team was world champions last year, so he had the thrill of that.

Reds broadcaster Marty Brennaman, who had just talked to Kalas a week before, added:

I always find it interesting when a celebrity passes away and people are so quick to say, ‘He was a great actor,’ or, ‘He was a great broadcaster.’ Harry Kalas was a great person. As much as we will remember Harry as a broadcaster, many of us will remember him even more as being a hell of a guy. I considered Harry a very good friend, and I was concerned about his health. I talked to him about getting the proper amount of rest and the things that we need to think about at our ages. I was very concerned about him, but he sounded good. When I found out about it today, I was shocked. It’s very, very sad.’

Montgomery summed it up best with “we lost our voice today.”  For 39 seasons, Harry was the voice of the Phillies.  Players came and went, but Harry was always there.  Through the good times, through the really bad times, Harry was there and many fans have fond memories of him.  A makeshift memorial was placed at the Mike Schmidt statue during the Phillies next homestand. 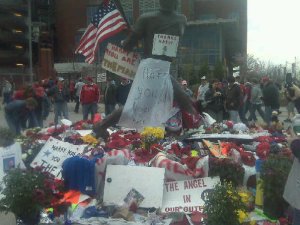 Real Deal’s story: I was in Washington with my cousin for the game, and we were checking out the stadium when someone texted me the news at first.  I looked on the internet on my phone, and both me and my cousin sent texts and called people to see if it was true, and nobody knew anything.  About 15 minutes later something popped up on CSN Mobile and I start spreading the news via text.  We went to find other Phillies fans, but couldn’t find any right away, until we ran into a writer for the Metro, who asked us about [Nats President] Stan Kasten’s plea to Philly fans to check out the stadium (in an attempt to sell tickets).  We explained to him we bought the tickets before we heard about him asking fans to come down to DC, and asked the reporter if he had heard about Harry, and he said no.  He then said he would have to change the article, and asked us about Harry and how we felt and such, and it was published the next day.  The trip was fun, the Phillies won, but the day was somber.

Roose’s story: Me and Justin Evans of “Red Pinstripes Are Cooler” were playing NHL 09 on X-Box Live when Evans told me that he saw on Twitter that HK collapsed in the booth. We kept our eyes glued to the computer screen until when we started a game, Evans told me that he had passed via Todd Zolecki. We sat there in silence for a couple minutes and then he said “I gotta go” and we just shut off the game. I sat there at my desk and just cried. It was such a horrible feeling. He was the voice of this franchise and the voice I grew up on. I recently purchased a Jimmy Rollins jersey and bought a “HK” patch and had it sewn on the jersey. I will always wear that jersey and will always think of Harry. We miss you.