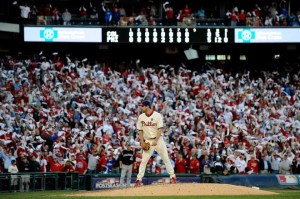 Cliff Lee fell only one out from a complete game shut out in his first playoff start but he did just fine as the Phillies won 5-1 to start the NLDS. The Phillies take an early 1-0 lead in the best of five series versus Colorado, a huge win for a team that struggled down the stretch in September.

I couldn’t watch most of the game because I was in class from 3:15 until 6:00 but from what I was able to see when sneaking a peak online (channelsurfing.net is a great site to watch games), I was very impressed and very pleased to see this team manufacture five runs without the long ball.

The bats came alive in the 5th inning when the Phillies got two runs off of an RBI double by Raul Ibanez and an RBI single by Carlos Ruiz. They then tacked on three more runs in the sixth with Ryan Howard’s RBI double, Jayson Werth’s RBI triple off th left-centerfield wall that would have been gone if it weren’t for the hurricane-like winds, and then an RBI single by Ibanez to cap off the scoring.

Lee was phenomenal in his start, pitching a complete game, allowing one run on six hits, a walk, and striking out five. It was nice having him go the whole way because I think the Phillies are still uncertain with their bull pen.

Ubaldo Jimenez was doing fine until that 6th inning came around. He got yanked after Werth’s triple and got charged with the run when Ibanez singled him in.

The Phillies would love to take both home games versus the Rockies so they can go to Denver for one and be done with this series. The faster they end this series, the more rest Lee and Hamels will get and be ready to be the #1 and #2 for the NLCS.

The Rockies need this win bad in order to earn a crucial split in Philadelphia and not be on the brink of elimination if they go down 0-2. They are a come back team so the Phillies should not ease up at all this series.

If Hamels can follow up Lee’s stellar performance, look for the Phillies to turn to JA Happ for game three. The Rockies had trouble with the left-handed Lee all day today and could continue to struggle versus Hamels and possibly Happ.