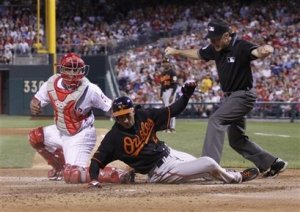 On th 45th anniversary of Jim Bunning’s perfect game, you would expect a special game from Cole Hamels. Well he did indeed deliver, going eight innings, striking out 10 and surrendering two runs on seven hits. Surely one of the best offenses can give Hamels the support. Wrong. After Greg Dobbs solo home run in the second, the Phillies offense could only manage two hits as they lost 2-1 to the Baltimore Orioles, capping another sweep and a 1-8 home stand.

Hamels was just fantastic despite giving up the two runs. His change up was deadly and his fastball was hitting all the spots. Just shows how good a pitcher does when the game is being caught by Carlos Ruiz. He also showed more promise at the plate than most of the Phillies offense as he almost doubled down the line during one at bat and almost hustled out a grounder in another.
I don’t like to play the “if card” but seriously, if the umpire made the right call in the eighth when Jimmy Rollins was “tagged,” Shane Victorino’s double would have driven him in. Rollins hit a slow grounder to first basemen Ty Wigginton who then flipped the ball to the pitcher who clearly missed the tag. The umpire called Rollins out, forcing Charlie Manuel to argue the call and get ejected. Victorino doubles and then Chase Utley grounded out to waste the opportunity.
Unfortunately for Jimmy, that does not excuse him for the ripping he’s about to get. He sucks, plain and simple. Ever since his MVP year, he has tried to be better than the player he truly is. He’s a great fielder and a 6-8 spot hitter and nothing more. A lead off hitter should not have a .260 OBP. Once Raul Ibanez is back, Victorino should be the lead off guy with Utley and Jayson Werth flopping in the two-spot depending on the opposing pitcher. Rollins should sit in the six or seven spot, swapping with Pedro Feliz now and then. I understand he’s trying to draw more walks but he’s hitting fly balls and not getting on base.
Friday: The pitching got knocked around en route to a 7-2 butt kicking to the lowly Orioles.
Saturday: It was a very exciting game. Down 3-0, the Phillies got two runs in and had two men on. The sick Ryan Howard pinch hit, and drove a ball deep into the bull pen to give the Phillies a 5-3 lead. In the top of the ninth, Ryan Madson surrendered a solo home run, allowed a base runner, and then Brian Roberts took his two-out, 1-2 fast ball deep to right to give the Orioles the 6-5 lead. They held on and won.
Series MVP’s:
Shane Victorino (PHI): 5-9; 2 runs; 3 doubles; stolen base
Brian Roberts (BAL): 5-13; 3 runs; double; game winning HR; 5 RBI’s; SB
Nex Series: Philadelphia Phillies (36-31; 23-9 on the road) at Tampa Bay Rays (37-34; 21-12 at home)
This is the World Series rematch MLB has been waiting for except for both teams aren’t as hot as they were when they last met in the fall classic. For the Phillies, this will be the first real rematch versus Pat Burrell. We also will have to listen to those damn cowbells all series.
This is a huge series for the Phillies, who are currently on a six game losing streak. The Rays took two of three from the Mets, helping the Phillies. The Phillies are 3-9 versus the AL while the Rays 8-4 versus the NL.
I expect to see some shaking up of the line up during this series. I don’t know if Manuel will stick with Rollins at lead off but I certainly wouldn’t. If I could chose the line up, it would look like this:
Victorino CF/Utley 2B/Feliz 3B/Howard 1B/Werth LF/Rollins SS/Stairs DH/Ruiz C/Dobbs RF
Rollins will not be swinging out of his slump so I want to drop him to six. As for my 3-4-5 pitch, Feliz has done a great job at getting on base. Howard could use the RBI opportunities with Victorino, Utley, and Feliz in front of him while Werth can protect Howard. This line up will also force the Rays to dig into their bull pen in late innings.
Probables:
6/23: Moyer (4-6, 6.35 ERA); Price (1-1, 3.46 ERA)
6/24: Blanton (4-3, 5.28 ERA); Garza (4-5, 3.83 ERA)
6/25: Bastardo (2-2, 5.21 ERA): Sonnanstine (5-7, 6.60 ERA)