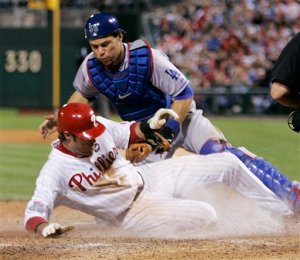 I can still remember some of the finest and not so finest moments of my Little League days. I would remember seeing the kids on my team hit monstrous home runs and the coaches on the other team want to see their Babe Ruth cards. I would remember winning tournaments and getting awesome trophies that now collect dust in my room.

But I would also remember a few things that would make me cringe. I played baseball in Atlantic City where I grew up and I won’t go into those details because they weren’t relevant to baseball. If you remember the Toms River, NJ team that won the Little League World Series in 1998, you would remember Casey Gaynor who would terrorize the hitters in that tournament, let alone terrorize our team in the championship game of a tournament (especially me).

But there is one moment I still remember that is so embarrassing. I went to Holy Spirit High School in Absecon and became friends with a kid named Andrew Richard. He reminded me of a play when Chelsea (my team) played Absecon in a tournament and Richard stole home. He would continue to remind me of this in high school.

Well I didn’t need Richard to remind me of that play because last night, Jayson Werth made me look back at that moment versus the Dodgers. Werth stole second with Jimmy Rollins at the plate and then took third with Raul Ibanez up to bat. Werth is now standing on third with Pedro Feliz up to bat.

Richard stood on third and was watching the pitcher. He knew that he was unfocused. After the pitcher threw to the plate, Richard took his usual lead off third base but kept walking. As the catcher lazily tossed the ball back to the pitcher who then turned his back, Richard bolted. Chelsea’s pitcher couldn’t get the throw home in time as Richard slid in safe. Werth did the same thing to Ronald Belisario and Russell Martin.

I still laugh when I see major leaguers do stupid things like not pay attention to runners. I also love it when runners play the game with that extra edge. It makes you wonder why some of these athletes get payed to make the same mistakes a 12 year old would make. It also makes you wonder why the guys who go out there, play hard, and have fun get over shadowed by stuff Manny Ramirez or other players do.